Genesis 11.31 .Terah took his son Abram, his grandson Lot son of Haran, and his daughter-in-law Sarai, the wife of his son Abram, and together they set out from Ur of the Chaldeans to go to Canaan. But when they came to Harran, they settled there.

Genesis 12. 1. The Lord had said to Abram, “Go from your country, your people and your father’s household to the land I will show you. 2. “I will make you into a great nation, and I will bless you; I will make your name great, and you will be a blessing.  3 . I will bless those who bless you, and whoever curses you I will curse; and all peoples on earth will be blessed through you.”

Genesis 12. 5. He took his wife Sarai, his nephew Lot, all the possessions they had accumulated and the people they had acquired in Harran, and they set out for the land of Canaan, and they arrived there. 10. Now there was a famine in the land, and Abram went down to Egypt to live there for a while because the famine was severe.

Genesis 12.  11 . As he was about to enter Egypt, he said to his wife Sarai, “I know what a beautiful woman you are. 12 .When the Egyptians see you, they will say, ‘This is his wife.’ Then they will kill me but will let you live. 13 .Say you are my sister, so that I will be treated well for your sake and my life will be spared because of you.”

Genesis 12. 14 .When Abram came to Egypt, the Egyptians saw that Sarai was a very beautiful woman. 15 .And when Pharaoh’s officials saw her, they praised her to Pharaoh, and she was taken into his palace. 16 .He treated Abram well for her sake, and Abram acquired sheep and cattle, male and female donkeys, male and female servants, and camels. 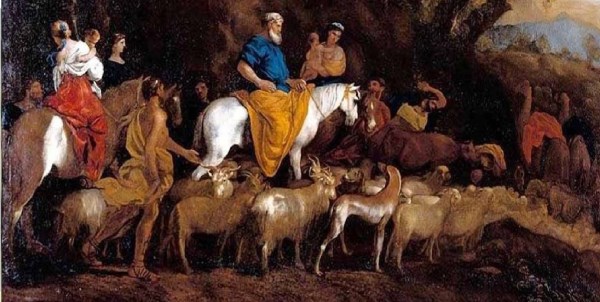 Genesis 12. 17 . But the Lord inflicted serious diseases on Pharaoh and his household because of Abram’s wife Sarai. 18 . So Pharaoh summoned Abram. “What have you done to me?” he said. “Why didn’t you tell me she was your wife? 19 . Why did you say, ‘She is my sister,’ so that I took her to be my wife? Now then, here is your wife. Take her and go!” 20 . Then Pharaoh gave orders about Abram to his men, and they sent him on his way, with his wife and everything he had.

Genesis 13. 1. So Abram went up from Egypt to the Negev, with his wife and everything he had, and Lot went with him. 2 . Abram had become very wealthy in livestock and in silver and gold. 7 . And quarreling arose between Abram’s herders and Lot’s. The Canaanites and Perizzites were also living in the land at that time. 8 . So Abram said to Lot, “Let’s not have any quarreling between you and me, or between your herders and mine, for we are close relatives. 9  .Is not the whole land before you? Let’s part company. If you go to the left, I’ll go to the right; if you go to the right, I’ll go to the left.”