Genesis 39.1.Now Joseph had been taken down to Egypt. Potiphar, an Egyptian who was one of Pharaoh’s officials, the captain of the guard, bought him from the Ishmaelites who had taken him there. 6 . So Potiphar left everything he had in Joseph’s care; with Joseph in charge, he did not concern himself with anything except the food he ate. Now Joseph was well-built and handsome .

Genesis 39.13. When she saw that he had left his cloak in her hand and had run out of the house, 14 .she called her household servants. ‘Look,’ she said to them, ‘this Hebrew has been brought to us to make sport of us! He came in here to sleep with me, but I screamed. 15 .When he heard me scream for help, he left his cloak beside me and ran out of the house.’ 16 . She kept his cloak beside her until his master came home. 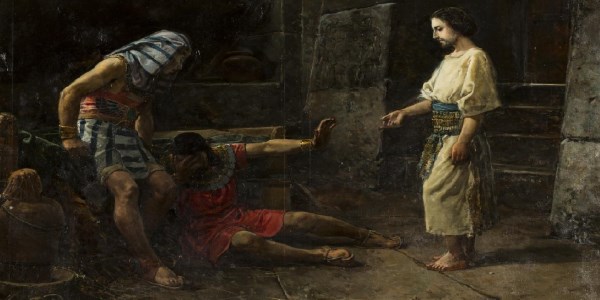 Genesis 39.19 . When his master heard the story his wife told him, saying, ‘This is how your slave treated me,’ he burned with anger. 20 . Joseph’s master took him and put him in prison, the place where the king’s prisoners were confined. But while Joseph was there in the prison,

Genesis 40. 1 . Some time later, the cupbearer and the baker of the king of Egypt offended their master, the king of Egypt. 4 .The captain of the guard assigned them to Joseph, and he attended them.

Genesis 41.1 . When two full years had passed, Pharaoh had a dream: he was standing by the Nile, 14 . So Pharaoh sent for Joseph, and he was quickly brought from the dungeon. When he had shaved and changed his clothes, he came before Pharaoh. 16 . ‘I cannot do it,’ Joseph replied to Pharaoh, ‘but God will give Pharaoh the answer he desires.’ 29 . Seven years of great abundance are coming throughout the land of Egypt, 30 . but seven years of famine will follow them. Then all the abundance in Egypt will be forgotten, and the famine will ravage the land.

Genesis 41.40 . You shall be in charge of my palace, and all my people are to submit to your orders. Only with respect to the throne will I be greater than you.’41 . So Pharaoh said to Joseph, ‘I hereby put you in charge of the whole land of Egypt.’ 42 . Then Pharaoh took his signet ring from his finger and put it on Joseph’s finger. He dressed him in robes of fine linen and put a gold chain round his neck.

Genesis 41.53 .The seven years of abundance in Egypt came to an end, 54 . and the seven years of famine began, just as Joseph had said. There was famine in all the other lands, but in the whole land of Egypt there was food. 57 . And all the world came to Egypt to buy grain from Joseph, because the famine was severe everywhere.