Exodus 5.3 .Then they said, ‘The God of the Hebrews has met with us. Now let us take a three-day journey into the wilderness to offer sacrifices to the Lord our God, or he may strike us with plagues or with the sword.’ 4 .But the king of Egypt said, ‘Moses and Aaron, why are you taking the people away from their labour? Get back to your work!’

Exodus 7.7 .Moses was eighty years old and Aaron eighty-three when they spoke to Pharaoh.8 .The Lord said to Moses and Aaron, 9. ‘When Pharaoh says to you, “Perform a miracle,” then say to Aaron, “Take your staff and throw it down before Pharaoh,” and it will become a snake.’ 10 .So Moses and Aaron went to Pharaoh and did just as the Lord commanded. Aaron threw his staff down in front of Pharaoh and his officials, and it became a snake. 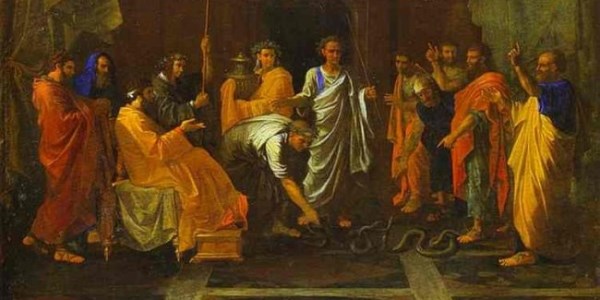 Exodus 7.11 .Pharaoh then summoned the wise men and sorcerers, and the Egyptian magicians also did the same things by their secret arts: 12 .each one threw down his staff and it became a snake. But Aaron’s staff swallowed up their staffs. 13 .Yet Pharaoh’s heart became hard and he would not listen to them, just as the Lord had said.14 .Then the Lord said to Moses, ‘Pharaoh’s heart is unyielding; he refuses to let the people go.

Exodus 7.20 . Moses and Aaron did just as the Lord had commanded. He raised his staff in the presence of Pharaoh and his officials and struck the water of the Nile, and all the water was changed into blood. 22. But the Egyptian magicians did the same things by their secret arts, and Pharaoh’s heart became hard; he would not listen to Moses and Aaron, just as the Lord had said.

Exodus 8.20 .Then the Lord said to Moses, ‘Get up early in the morning and confront Pharaoh as he goes to the river and say to him, “This is what the Lord says: let my people go, so that they may worship me. 21. If you do not let my people go, I will send swarms of flies on you and your officials, on your people and into your houses. The houses of the Egyptians will be full of flies; even the ground will be covered with them.

Exodus 11.1 . Now the Lord said to Moses, ‘I will bring one more plague on Pharaoh and on Egypt. After that, he will let you go from here, and when he does, he will drive you out completely. 2 . Tell the people that men and women alike are to ask their neighbours for articles of silver and gold.’

Exodus 11.4 .So Moses said, ‘This is what the Lord says: “About midnight I will go throughout Egypt. 5 . Every firstborn son in Egypt will die, from the firstborn son of Pharaoh, who sits on the throne, to the firstborn son of the female slave, who is at her hand mill, and all the firstborn of the cattle as well. 9 .The Lord had said to Moses, ‘Pharaoh will refuse to listen to you – so that my wonders may be multiplied in Egypt.’

Exodus 14.5 . When the king of Egypt was told that the people had fled, Pharaoh and his officials changed their minds about them and said, ‘What have we done? We have let the Israelites go and have lost their services!’ 6 . So he had his chariot made ready and took his army with him. 7 . He took six hundred of the best chariots, along with all the other chariots of Egypt, with officers over all of them. 9 . The Egyptians – all Pharaoh’s horses and chariots, horsemen[a] and troops – pursued the Israelites and overtook them as they camped by the sea near Pi Hahiroth, opposite Baal Zephon.

Exodus 14.14 .The Lord will fight for you; you need only to be still.’ 15 .Then the Lord said to Moses, ‘Why are you crying out to me? Tell the Israelites to move on. 16 . Raise your staff and stretch out your hand over the sea to divide the water so that the Israelites can go through the sea on dry ground. 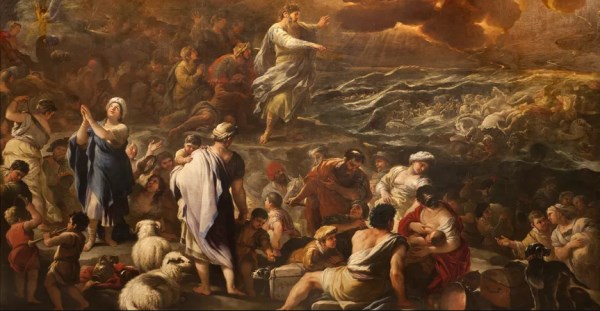 Exodus 14. 17. I will harden the hearts of the Egyptians so that they will go in after them. And I will gain glory through Pharaoh and all his army, through his chariots and his horsemen.