Genesis 4.1. Adam  made love to his wife Eve, and she became pregnant and gave birth to Cain.  She said, “With the help of the Lord I have brought forth[c] a man.” 2 .Later she gave birth to his brother Abel. 3. In the course of time Cain brought some of the fruits of the soil as an offering to the Lord. 4. And Abel also brought an offering - fat portions from some of the firstborn of his flock. The Lord looked with favor on Abel and his offering, 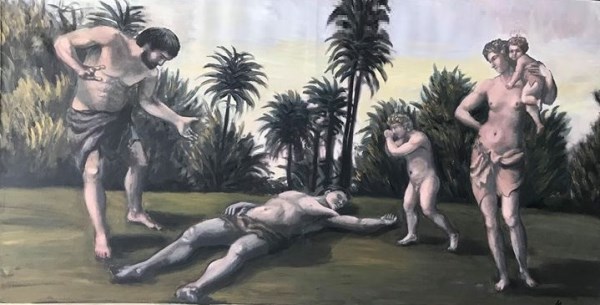 Genesis 4. 13 .Cain said to the Lord, “My punishment is more than I can bear. 15 .But the Lord said to him, “Not so[e]; anyone who kills Cain will suffer vengeance seven times over.” Then the Lord put a mark on Cain so that no one who found him would kill him.

Genesis 4. 16 .So Cain went out from the Lord’s presence and lived in the land of Nod,  east of Eden. 17 .Cain made love to his wife, and she became pregnant and gave birth to Enoch. Cain was then building a city, and he named it after his son Enoch.

Genesis 6. 1. When human beings began to increase in number on the earth and daughters were born to them, 2 . the sons of God saw that the daughters of humans were beautiful, and they married any of them they chose. 3 . Then the Lord said, “My Spirit will not contend with  humans forever, for they are mortal ; their days will be a hundred and twenty years.”

Genesis 6. 4 . The Nephilim were on the earth in those days—and also afterward—when the sons of God went to the daughters of humans and had children by them. They were the heroes of old, men of renown. 5. The Lord saw how great the wickedness of the human race had become on the earth, and that every inclination of the thoughts of the human heart was only evil all the time.  7. So the Lord said, “I will wipe from the face of the earth the human race I have created—and with them the animals, the birds and the creatures that move along the ground—for I regret that I have made them.”