Genesis 42. 1. When Jacob learned that there was grain in Egypt, he said to his sons, ‘Why do you just keep looking at each other?’ 2 .He continued, ‘I have heard that there is grain in Egypt. Go down there and buy some for us, so that we may live and not die.’ 3 . Then ten of Joseph’s brothers went down to buy grain from Egypt.

Genesis 42.8 . Although Joseph recognised his brothers, they did not recognise him. 9 . Then he remembered his dreams about them and said to them, ‘You are spies! You have come to see where our land is unprotected.’ 10 . ‘No, my lord,’ they answered. ‘Your servants have come to buy food. 11 We are all the sons of one man. Your servants are honest men, not spies.’ 15 . And this is how you will be tested: as surely as Pharaoh lives, you will not leave this place unless your youngest brother comes here. 17 . And he put them all in custody for three days. 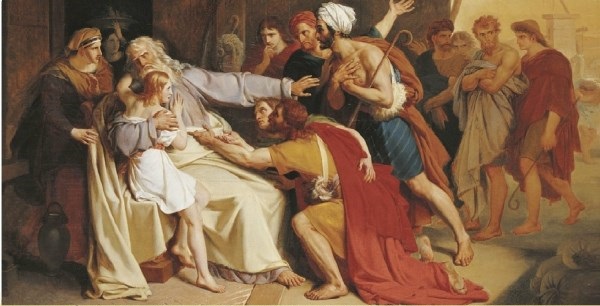 Genesis 43. 11 . Then their father Israel said to them, ‘If it must be, then do this: put some of the best products of the land in your bags and take them down to the man as a gift – a little balm and a little honey, some spices and myrrh, some pistachio nuts and almonds. 12 . Take double the amount of silver with you, for you must return the silver that was put back into the mouths of your sacks. Perhaps it was a mistake. 13 . Take your brother also and go back to the man at once. 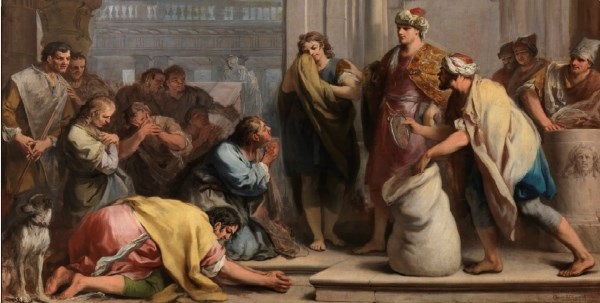 Genesis 44. 8 . We even brought back to you from the land of Canaan the silver we found inside the mouths of our sacks. So why would we steal silver or gold from your master’s house? 12. Then the steward proceeded to search, beginning with the eldest and ending with the youngest. And the cup was found in Benjamin’s sack.

Genesis 45. 4 .Then Joseph said to his brothers, ‘Come close to me.’ When they had done so, he said, ‘I am your brother Joseph, the one you sold into Egypt! 5 . And now, do not be distressed and do not be angry with yourselves for selling me here, because it was to save lives that God sent me ahead of you. 14 .Then he threw his arms around his brother Benjamin and wept, and Benjamin embraced him, weeping.

Genesis 45.28 . And Israel said, ‘I’m convinced! My son Joseph is still alive. I will go and see him before I die.’ 46. 6 . So Jacob and all his offspring went to Egypt, taking with them their livestock and the possessions they had acquired in Canaan. 7 . Jacob brought with him to Egypt his sons and grandsons and his daughters and granddaughters – all his offspring.

Genesis 46.31.Then Joseph said to his brothers and to his father’s household, ‘I will go up and speak to Pharaoh and will say to him, “My brothers and my father’s household, who were living in the land of Canaan, have come to me. 33 . When Pharaoh calls you in and asks, “What is your occupation?” 34 .you should answer, “Your servants have tended livestock from our boyhood on, just as our fathers did.” Then you will be allowed to settle in the region of Goshen, for all shepherds are detestable to the Egyptians.’

Genesis 47.28 . Jacob lived in Egypt seventeen years, and the years of his life were a hundred and forty-seven. 2 .Then Joseph directed the physicians in his service to embalm his father Israel. So the physicians embalmed him, 3 . taking a full forty days, for that was the time required for embalming. And the Egyptians mourned for him seventy days.